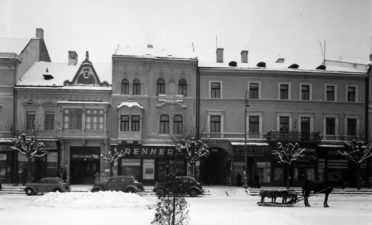 “How do prominent people have fun in Cluj?” and “How were the parties that were served and what do they dance?”

180 years ago, our great-great-grandparents went to elegant soirees where they danced passionately and flirted. Serving exotic dishes, they sipped rum with tea after Russian fashion. Foreigners arriving in town at the inn woke greeted with live music from a gipsy folk band. These are real sequences from Cluj over 180 years ago that we relive quoting the English writer John Paget.

At that time, each home received visitors after 5 pm. The bohemian English writer was a darling of the baronesses of the Hungarian noble houses in the city. During the time spent in Cluj (1835-1836), he took Hungarian lessons to be able to communicate better with his hosts and understand their lifestyle.

“Usually, the morning after drinking a cup of coffee each after eating a slice of bread, we take German and Hungarian lessons and until two o’clock, which signaled lunchtime. From five to eight or nine, each house receives visitors, and we generally visit, the dining rooms of ladies during this period. At nine we would become hungry and we would enjoy a dinner that was heartier than lunch. We concluded the day smoking our pipes and reading.”

During winter evenings, the baronesses, the countesses of Cluj met to delight in music, to recount and to meet new faces for flirting. John Paget did not miss the opportunity to attend the Cluj soirees as he was of course invited. From him we learn how such a spree looked:

“In the first room there is a group of young ladies, with no other soul to speak with them, except by a young stray that just came out of college or any old and courteous cavalryman, who pitied their condition. The next two rooms were the usual sets of tables playing cards, matrons and dandy, some beautiful women who represented the prime of life and the only ones that drew attention.”

At parties, young ladies were separated from the other ladies lest anyone feel uncomfortable by the flirting:

“I do not know how this separation is made between girls and ladies, but I’m sure some chic mothers were rather cautious as to think that the separation between mother and daughter will be good for both. Mothers flirting, a bit too pronounced, were not well adapted to the innocence of their daughters. The fresh color of the daughters and youthful charms surely highlighting the beauty of their mothers.”

The dresses worn to soirees were just like those of ladies in the great European capitals.

“Ladies dresses were just like those we saw in other parts of Europe, the only difference being that here tended to be overly cheerful colors.” In contrast, dancing is more passionate in Cluj:

“Dancing is more passionate here than in other places.”

And the biggest stress for a girl was to have a small number of partners to dance.

“One lady told me that at that time they did not say ‘the daily bread’ without adding ‘a large number of partners to the next ball.’  I will let theologians decide how appropriate is this association. However I’m sure it was a sincere greeting. And I think losing ‘the daily bread’ was not so cruel as having no partners,” wrote John Paget.

At such parties, they were exotic dishes and the drink is consumed by Russian fashion.

“The food served was exotic. A large table was filled with teapots, cups and saucers, cakes and other sweets, candy, ice cream and a large bottle of rum to be served with tea, after the Russian fashion, and many other tempting delicacies.”

The Cluj soiree had soft music, the difficult and flirtatious waltz:

“With an amateur background in music, that no one would listen to, with a very difficult waltz, that everyone enjoyed, with a bit of scandal, a little flirting, and the party was finished at ten.”

In another note there were parties held in Cluj with gypsy musicians:

“I was almost surprised by the power of sound that could be heard when we entered the dining room, for wherever, gypsy musicians do not even spare their lungs, even when hands are in the service of their customers. This band was one of the best in the country and was composed of no less than twenty or thirty members, all in hussar uniforms and showing very well. Few knew the musical notes, maybe none, but even managed to play difficult music with uncanny accuracy.”

Gypsies were known as talented and skillful bards. They managed to convey more emotion to the crowd.

“Melancholic sounds that start, then fine cords that introduce the gypsies and, finally, the passionate and wild outbreak, all depend on the composition and the interpreter.”

Often, when gypsies glimpsed a foreigner in Cluj, it was customary to annoying him with the most popular songs until they were rewarded in regards to their interpretation.

“A foreigner will be amazed that a few did during his accommodation in an inn in Cluj-Napoca. He will be visited by a band of gypsies who greeted him with the choicest songs. It is quite annoying that you can not get rid of them if you do not pay well enough for the ‘compliment’ that they brought.”

Quotes used in the article  are from the book “Hungary and Transylvania” by John Paget, appearing under the  Casa Cărții de Știință Publishing House.
Photographs: www.nyfolklore.org

Citește Read about other experiences of the English writer John Paget in this article: As a tourist in Cluj with an English hat