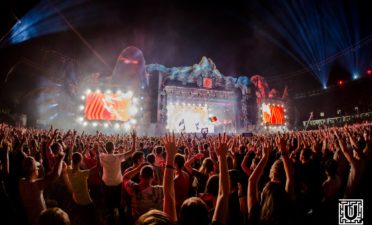 UNTOLD 2017 subscriptions will be put back on sale!

The first tranche of subscriptions for UNTOLD 2017 was sold in less than three minutes. As a result, many festival fans were unable to purchase their tickets yet. Behold, the UNTOLD organizers will give way to a new round:

Subscriptions and tickets can be purchased at a special price only by registered fans on www.untold.com.

The price of a ticket valid during the festival (4 day pass) costs 365 lei + taxes. A day ticket costs 200 lei + taxes. Friday there will also be VIP subscriptions made available to sell.

Fans who have already registered and have bought subscriptions for UNTOLD 2017 during the first round of the 2017 special price sales, already can use the link received by email. It will become functional Friday, December 9, at 6 pm. Each fan will be able to purchase a maximum of 4 registered subscriptions, 1 day tickets, or VIP subscriptions. Those who have not yet registered on the festival’s website, you can do it now!

The good news is that the procurement procedure is simplified. Thus, after the activation link, fans can book tickets or subscriptions required. Their payment can be made until Tuesday, December 13, at 5 pm (via credit card, bank transfer or money order).

Those who already know that they will participate in UNTOLD 2017 can already inform themselves about accommodation options. They will be available for booking beginning in 2017. Details on www.untold.com/accommodation.

UNTOLD, BEST MAJOR FESTIVAL AND BRAND OF THE YEAR 2015 IN ROMANIA

In 2016, the financial impact generated by the UNTOLD festival meant more than 35 million euro drawn into the Cluj community. Of the more than 300,000 fans, 25% were from Cluj County, 65% were from around Romania, and 10% from abroad, representing more than 30,000 tourists in four days. Most festival from abroad came from the UK, followed by the United States, the Netherlands and Germany.

UNTOLD  was appointed BEST MAJOR FESTIVAL in the European Festival Awards 2015 event held in Groningen, Netherlands. Another recognition came from the most important national representative of the marketing and communications industry, International Advertising Association Romania (IAA) which gave the festival the Brand of the Year 2015 title.