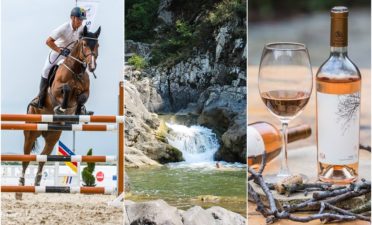 Situated only 32 km from Cluj-Napoca, Turda is one of five municipalities in Cluj County. A small town, it has became famous in recent years due to the growing interest for Salina Turda. The area’s touristic potential has attracted other investors, and for some time now Turda has become a major tourist area that offers services of the highest quality. If you want more than a simple walk, here’s what you’ll find in the area:

Near Salina Turda on the Durgău Hills, secular activities continue. Viticulture has been practiced here since the days of the Romans, when what is today Turda was known as Potaissa. Therefore, the wines of Crama La Salina carry the name ISSA, a tribute to the traditions of viticulture here. The vineyard is located about 100 m Salina Turda, and its story begins in 2011. After decades of inactivity,  viticulture on the Durgău Hills  was revived by two lovers of noble wines, Simion Muresan and Claudiu Sugar. After several years of investment and efforts, the vines … are alive!

What can you do here?

Even before arriving at Salina Turda, on the left, we find the Salina Equines Equestrian Center. Equestrian field covers an area of two hectares. The room really caught alive in the summer of 2016 when they organized this first edition of the Salina Equines Horse Trophy International Competition. The event was held in collaboration with the Romanian Equestrian Federation (ERF) and proved that there is interest from the public for such competitions. Perhaps more importantly, it proved that mentalities are changing and people are beginning to learn again how relate to these special animals: horses.

For three days, riding enthusiasts and lovers of outdoor sports events were able to admire the horses and riders, the competition itself but also the surroundings.

Considered by many foreign publications as one of the most spectacular underground sights Salina Turda awaits its visitors with numerous attractions (Franz Josef Gallery, Joseph Mine – the room of echoes, Meeting Crivac, Rudolf Mine, Theresa Mine), spa and leisure ( spa, swimming pool + big wheel, miniature golf, bowling, boating on the underground lake, tennis, billiards, etc.).

Salina Turda is today a veritable museum of the history of salt mining, and is certainly the most famous destination for tourists who visit Turda and Cluj-Napoca.

The mine dates back to the seventeenth century and is in Turda’s Durgău-Valea Sărată. Entry into the salt mine (through the Franz Josef access gallery) was done until 2010 from no. 54A Salinelor Street (Turda Nouă district) and now from the new and modern Salina-Durgău tourist entry center (No. 7 Durgău Alley). Salina Turda is included in the list of historical monuments in Cluj, drafted by the Ministry of Culture and National Heritage of Romania in 2010.

Just 10-15 km west of Turda, Turda Gorge offers travelers a beautiful natural landscape, with steep cliffs and sharp ridges with flora and fauna that delights souls. With a length of 1.3 km, formed by erosion of limestone rocks by the river Hăşdate, the Cheile Turzii nature reserve offers many opportunities for leisure.

Whether you opt for hiking or relaxing on a blanket in nature, whether you prefer more adrenaline and engage in paragliding or climbing on the rocks, you will not regret that you have chosen to visit the canyon.

Also 10-15 km west of Turda, we find a tourist treasure that few people know. You can arrive at Ciucaş Waterfall from Turda, towards Mihai Viteazu. At the exit from Mihai Viteazu, turns right on 103G, towards Cheia village. Take the bridge over the Arieș and suddenly turn left ? You keep on the road until you get to the barrier, and from there the trail climbs through forest to the waterfall.