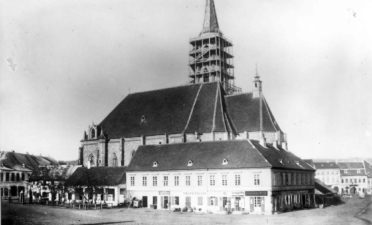 As a tourist in Old Cluj with an English Hat

Winter in Cluj, just like many other cold winters. The cold, snow and good people represent the Cluj charm that foreigners enjoy. There were many travelers throughout the ages who visited Cluj and wrote down their impressions. Along with a cup of hot tea or a cup of coffee, winter stories about Cluj from two centuries ago are only suitable today. Let us, or a moment, put on the hat of bohemian English writer John Paget, troubadour in Cluj during the years 1835-1836. Let us see what unexpected trip to see what will come from it!

“Winter is settled for good, and we decided to stick around in Cluj-Napoca, at least for a while,” wrote the English wanderer, an aficionado for journeys around the world.

Cluj was a beautiful little town then:

“Cluj-Napoca is a nice little town of about twenty-five thousand inhabitants in the Someș valley, surrounded by hills on all sides. It is built around a large market, among which dominates the splendid gothic cathedral. In this market almost all the streets are perpendicular. “

The streets were not crowded with cars, while the houses and architecture respected a certain rigor:

“The streets are large, and the houses are beautiful though, usually have only one floor and never more than two.”

He made drawings of the walls, gates and towers of old, some even functional:

“The old walls, gates and towers that once protected the town are still standing, at least in part, and I think still close at night.”

To travel on the carriage roads that bring you to town was a true adventure:

“We went down the Feleacul hill with enormous speed, for weak horses and weaker harnesses had no power to brake. Neither did we feel safe until we went quickly through one of the old gates of Cluj and until we accidentally rattled the carriage on the pavement.”

Arriving in the city, first place that gives you a stopover and rest was the inn. In Cluj you quickly entered the graces of people even if you were a foreigner. The hospitality of Clujeans and the natural way in which they welcome tourists coming from other lands softens even the iciest of hearts.

“An Englishman accustomed to stiffness, although educated in English style, can not understand how a foreigner is welcomed here. The first family I visited invited us to have lunch and dinner at her whenever we could.”

Like lifelong friends, the Clujeans warned of some peers not as well-intentioned and and made their house available to them, with meals for the people that they saw the first time:

“-You will find few fair people in Cluj-Napoca. The inns are bad, so whenever you’re not busy, we will await with open arms at two o’clock for lunch and dinner at nine o’clock.”

These conversations were not complacency. The invitation was made wholeheartedly:

“It was not a simple replica spoken politeness, for if I skipped one day, a servant would certainly come to invite us for the next day.”

Clujeans almost 200 years ago were welcoming and helpful. The goodness broke the barriers of language, religion or those due to different lifestyle.

“It makes no sense to say that we do not already feel at home in the company of these people,” confessed the Englishman John Paget.