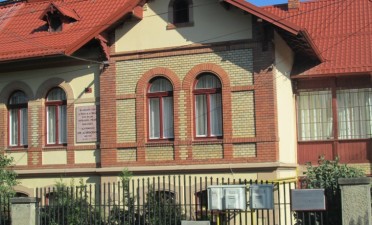 At no. 31 Andrei Mureșanu street, you happen upon one of the “story” houses of Cluj. Here in one of the rooms lived the writer Ion Agârbiceanu.
The writer moved to Cluj in 1919 where he engaged in political journalism for over a decade. From 1919 he became director of the newspaper “Patria” in Cluj, then from 1938 the newspaper “Tribuna”. He wrote for magazines across the country.

A theme addressed in the 1938 novel Sectarii, but extremely topical today, is satire on political parties and “sectarianism from which they came.”

Ion Agârbiceanu explained in “Adaos la mărturisiri” why he wrote the novel Sectarii “If being under political support could not do anything, I feel compelled to help society to beware of ridicule and and degrading exaggerations in the fight for a new settled.”

In August 1940, after the Vienna Awards, when Transylvania was taken from the body of the country, Agârbiceanu withdrew to Sibiu, where he would stay until 1945 when he returned to Cluj. In the house on Andrei Mureşanu, Ion Agârbiceanu wrote the book “Din munți și din câmpii”, dedicated to the world of living creatures, short stories “Faraonii”, “Popa Man,” “Jandarmul”, “Pascalierul” and many other literary works.

The writer lived in this house from 1924 until 1963, when he died. He is buried in the Hajongard cemetery.

Across the street from the house where the writer Ion Agârbiceanu was created is another interesting building. The inscription made in relief in Hungarian “Epult 1911” reveals that the building was built more than a century ago.

Then, neighboring the already famous building no. 31 is a house with a patio that one can not really notice. After the iron wrought gate opens a green tunnel that leads to a wooden door ajar, leaving you to imagine a large garden, tall trees with branches and many other substitutes got a city dweller that is sick of the city’s clutter.