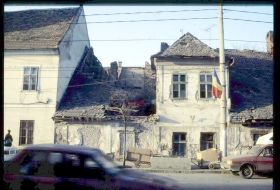 The Executioner’s House or the Cursed House?

Even if it is in ruins, the Executioner’s House is still on the list of places in Cluj where mystery and superstition are shrouded. No matter how skeptical and rational we are, we all like to stir our imagination and interest through a tall tale, that raises questions and makes us wince.

Situated in the former Ulița Turzii – currently Avram Iancu street, this building has surrounded itself with a series of legends that are more or less debated, many people considering it to be cursed!

The stories circulated says that here was the of home Cluj’s executioners during the medieval period.
Others say that living here would be an executioner (from other cities) who after giving up the profession, would withdraw to the Cluj area. Moreover, remorse for the numerous beheadings perpetrated by the former executioner would led to him dedicating himself to a lifetime of charitable work. An optimistic end for a dark legend, I would say …

The debate begins with the position of the house. The building is attached to the wall of the city, but outside it. Hence we arrive at the conclusion that: some say that a city’s executioner could not live outside the city walls (so the legend with former executioners who would have retired here being more likely). Others believe the contrary, the building is outside the city walls just because the job of executioner was considered “unclean.” Executioners did not enjoy much sympathy from Clujeans.
Yet another possible explanation is that the association of building with possible executioners is due to the fact in that area lived many low class people who generally engaged in such activities.

The status of “cursed place” was won in time, with the executioner’s house repeatedly falling into ruins. But, of course, this was not the only building affected by fire or other calamities that befell the city.
The association with the image of an executioner has created real superstitions, many believe that the repeated disasters that have hit the executioner’s house would be due to the curses that executioners who lived there bestowed upon the building.

Although most say that this building dates from the sixteenth century, many historians and experts say it is due to confusion. The building is positioned exactly on the old ditch of the fortress walls, they suggest that this could not be built before the mid eighteenth century and it was actually the home of a cooper and later existed as an inn.