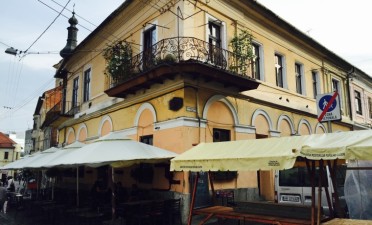 Tauffer House
Tauffer House was built at the beginning of the nineteenth century by the architect Georg Winkler. He was the one who created the initial plans for the Reformed Calvinist Church in the Lower City (also known as the Reformed Church with two towers) , the architecture was inspired by the model of the Big Church in Debrecen, Hungary.
At the beginning of the nineteenth century, Tauffer House, on no. 2 Vasile Goldiș street, was owned by a family of German upholsters – Tauffer, a family brought to Sibiu by the baron Samuel von Brukenthal.

The German upholsters, originally from Western Hungary, came to Cluj around 1790 during the context in which the capital of the Great Principality of Transylvania was moved from Sibiu to Cluj. The Tauffer family were under the protection of the baron George Banffy, the governor of Transylvania.
In the rooms of the building was held the first German language literary salon in the nineteenth century to become one of the most frequented salons in Cluj. Also in the Tauffer House lived Ioan Piuariu Molnar, the first Romanian professor at the Academic College of Cluj.