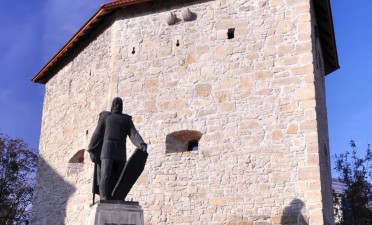 Passing by the theatre, Opera Park, and opposite the County School Inspectorate, your gaze falls on what remains of the medieval defense system of the Old City of Cluj. The fortification was built in the XVth century by order of King Sigismund of Hungary and its first mention dates from 1475 – the time of King Matthias Corvinus.

Seeing the wall, your mind runs toward a Cluj that is both mysterious and old …
Today, after the conservation and restoration carried out under the auspices of the City Council and City Hall of Cluj-Napoca, the Tailors Bastion has become a cultural icon, being an Urban Culture Center. It houses a cafe, an exhibition illustrating the history of the tailors’ guild in Cluj, and the space host various cultural events, lectures, exhibitions and concerts.

Over its more than 500 years of history, it was probably the strongest point of defense of the fortress, being the area most exposed to peril.
Carrying the name of the responsible guild, the bastion’s appearance has changed much due to having been destroyed and rebuilt several times. Affected by a riot of mercenaries who had not received their salary, successive sieges led by Mozes Szekely (1603) and Pasha Kuchuk (1660), from an explosion caused by lightning that struck the ammunition magazine, the and other wars, was rebuilt in its current form only in 1718 by the Austrian General Kriegsbaum.

A witness to important historical events, the Tailors Bastion began “career” of defender of the city, more significantly, in 1601. This year has a special historical significance because being captured after the battle of Miraslau, Baba Novac (Michael the Brave’s general) and the priest Saski was tortured and executed in the city of Cluj by the Transylvanian noblity. Near the tower, the impaled body of Baba Novac was exposed.
Returning from Vienna in the same year, Michael recaptured the city and, in appreciation for his former general, had a flag placed on the execution site.

On the south wall was installed a plate with the words: “After the battle of Guruslau, from August 3, 1601, Michael the Brave arrived with his army in Cluj in 11 to 15 August 1601, honoring the memory of General Baba Novac at the Tailors Bastion.”
The statue of the latter was built in 1975 in the gardens near the bastion, made by sculptor Virgil Fulicea.

During the communist period, after renovation works from 1956-1957 and in 1959, was developed as a history museum for the city, which included a photo lab and a restoration workshop. But this has never been open to the public, because the work was prohibited by the communist authorities in 1959.

But eventually, after another 50 years, the Tailor’s Bastion has received the status of cultural space of the city, making it a new part of the social life of Cluj – this time in a beautiful atmosphere of calm and peace, contrasting with its tumultuous historical past.