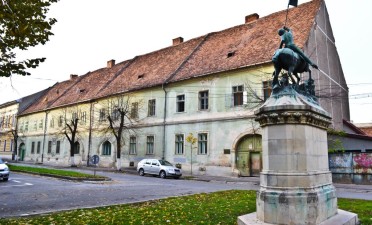 Statue of St. George killing the dragon
Cluj’s statues are silent witnesses of the passage of time and the many changes that this city has experienced. Some large and impressive, others small but expressive, some known by everyone, others less familiar to locals and tourists who stop in Cluj.
One of the most important statues of Cluj is that of St. George. Located in the little square in front of the Reformed Church on the Wolves’ Lane, is the equestrian statue of the saint, dressed in chain mail and slaying a dragon”. An interesting detail is that the armor on the saint is similar to the scales covering the body of the dragon! This detail became an inspiration for the poet and philosopher Lucian Blaga, in his poem “In front of a statue of Saint George” metaphorically capture this resemblance between winners and losers, between the forces of good and evil.
On the pedestal of the statue can be read an inscription, which translated, means: “A[nul] D[omnului] 1373. This work represents S[aint] George [and is] made by Martin and George of Clussenberch (Cluj). ”
Martin and George are the sculptors that in 1373, during the late Middle Ages, were commissioned by Emperor Charles IV on the occasion of his son Sigismund de Luxemburg’s marriage with Mary of Anjou, to create the first equestrian statue built in a public place – without have any connection to the surrounding architecture.
Thus, it becomes important to mention that the statue in Cluj represents a copy of the statue made by the two during the Middle Ages, the original being in Prague, at Hradciani Castle (some skeptics argue that even this is not the original statue). Another copy is in Budapest, close to the “Fishermen’s Bastion” (Hungarian “Halászbástya”)
Initially, a copy made in 1904 by the sculptor József Róna and the architect Kálmán Lux, was placed on St. George’s Square, which is currently the Lucian Blaga Square in front of the University Library. It was moved in front of the Reformed Church on Kogalniceanu Street in 1960 following the urban development and changes occurring in Cluj.

The new location seems to be matching the impressive edifice: the nearby buildings as well as the style of the Gothic Reformed Church, brown and surrounding silence recreates a medieval atmosphere that is unique in the city.
Maybe not as stunning and imposing in size as other statues of Cluj, the importance of the St. George statue is in its aesthetic, symbolic, and technical details – the rarely used and lost technique of wax casting of almost life sized statues.

Here are the lyrics written by Lucian Blaga: