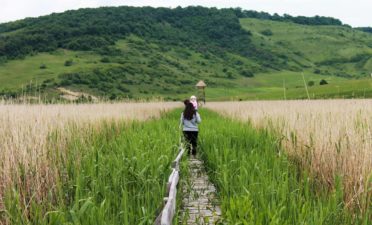 Two steps away from Cluj and after just an hour of listening to music in the car, whether you choose the good and longer road or the short and adventurous, you will arrive at the reeds in Sic, a small Transylvanian delta. What is the link between reeds and dance, everyone asks us? ?

It was past noon when, finally, we set out from Cluj. Along the way, coffee and sandwiches, stories between friends, and the background music that would become “ear worms.”

We left the E576, turning right towards Jucu. If you have a sense of adventure, the recommendation would be to not take the first right towards the Jucu de Mijloc, but rather wait until you get in Juc Herghelie and go on the 109D. You will still get to Jucu, but the four wheels will carry you on country roads that are less well known.

The villages around Cluj have something special. We managed to figure out exactly what. It is a combination as something approaching a European road and their isolation, as you go along the 109D. It is the sensation of a fantastic Eliade novel . A magic feeling, stood still …

Reaching Coasta, we turned left. The voice of the GPS took us out of our dream.

Here we are. Looking out the car window, the reeds in Sic invite you through their gentle swaying. We see a gazebo, and behold, a tower! Today we are like snails, we brought home with us. Blankets, food, clothes, and two guitars. We set ourselves up at the gazebo, not before looking around in amazement. There is no usual sight in the areas where we live.

The Reeds in Sic (Stufărișurile de la Sic) represents a nature reserve, a protected area for the abundant reeds and birds that inhabit here. A wooden deck, with its own special charm, helps the reeds cross from one side to the other. The first gazebo, not far from the road at the entrance to the reserve, leads you Transylvanian style to (already) make a halt. Today there’s no hurry. You can stop, you can sit, you can hear the silence …

Curiosity will urge you to go further. Halfway, you notice the wooden tower and you wonder if you can climb up there. Used for bird watching in the reservation< the tower is easily accessible for walkers. A wooden staircase climbs up to the first level, then the second.

From the tower, you look into the distance and notice the gazebo near the reserve’s exit. However, the wooden deck suddenly seems to stop somewhere long before reaching the gazebo. Hopefully, yo begin to check: are there any curves…?

So there is! The wooden bridge, more adventurous and challenging towards the end, carries you step by step towards the edge of the reserve. We make a halt here, before making a return walk.

We were preparing to leave Sic, heading toward Gherla this time. We said that after a small delay due to the rear wheels getting stuck in a ditch that it was also worth it due to the quiet road conditions.

We were reminded of a photograph with boots hanging in the porch of a cottage. With the help of indications received from villagers, we reached the Sic Dance Museum, a unique place in a village, a passion brought to life by a Dutchman who love these lands and traditions.

First, did you know that we have something in Cluj? A dance museum … How nice!

Sicăneşti dances, initially admired photos made by Korniss Peter, are those who have conquered the Dutchman Michel van Langeveld. In 2004, conquered by the Hungarian folklore and traditions still found and preserved in Sic, Michel bought an old and traditional dance house.

It is worth mentioning that Sic has been divided since 1438 into three areas along the three long streets: Felszeg, Forrószeg and Csipkeszeg (Street I, Street II, and Street III respectively), each with its own. In the past, each of these three blocks is one folk dance house (The Táncház movement).

The dance house purchased in 2004 by Michel is located on Csipkeszeg. Following its restoration, Michel rebuilt the dance house in Forrószeg, adding a new barn built in the same traditional style. In 2008, Michel van Langeveld founded the Csipkeszeg Foundation continues to promote and keep alive the rich history and traditions of dance discovered by him in Sic.

Once arriving at the Csipkeszeg Bed & Breakfast, walking into the court and ask if you can visit the museum. A friendly Dutchman will present the perspective of a man passionate about dance, Sic, and the traditions that have survived to modern times.

PS Michel has managed to gather from the locals, so far, about 460 pairs of boots. How? With the help of Dutch coffee ?

Finally, you will make a promise: we must return to one of the monthly dances events organized by Michel at the dance houses in Sic. The dance tradition has remained alive and is still here, thanks to such enthusiasts, is made known to us, the seekers of joy and genuine values.

Time seems to be stuck in a loop here, in Sic. The reeds the Sic are a sort of time portal into a different world, where you wear boots in dance steps toward peace and relaxation.