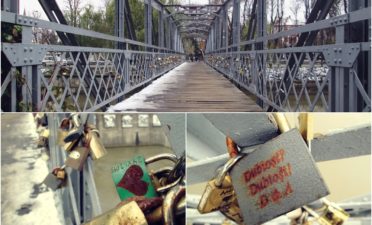 Padlocks on the bridge, stories locked in time

“The Elisabeta Bridge in Cluj has become a bridge between the ephemeral and the eternal.” I tell myself with a slow pace. I know that this Cluj bridge is the place where love padlocks can be found, the international symbol of hope that love lasts forever.

Eternity frightens me sometimes as much as the impermanence of things. Stepping carefully, I wonder what stories were locked in time through the padlocks on the bridge.

I wonder if these stories continue, yet, or if they come to an end, whatever it may be. I realize that no matter what, that unique moment which marked a promise, hope and love remains eternal in its own way.

The love locks in Cluj

In the town the heart of Transylvania, love locks made their first appearance as a phenomenon in November 2011. Then Valentine’s Day (February 2012), the authorities have arranged special supports at both ends of the Elisabeta Bridge, because this tradition does not affect the bridge’s structure and lovers enjoy a special space (the supports were heart-shaped). Then in 2013, an event was organized including (padlock Cluj) inviting lovers to declare their love here on the Elisabeta Bridge.

Why the Elisabeta Bridge?

The bridge remained in the collective consciousness of Clujeans as one of the most romantic places in the city. With its cumbersome and gray structure, it does not appear to be romantic. The Someș River does not necessarily inspire long walks … the charm of a place is often given, however, through its story. The concept of charm also stems from the feelings of people who have given worth and value to various phenomena over tens and hundreds of years.

It is said that this bridge became associated with meetings at the beginning of the previous century, when soldiers from the garrison on the Cetățuia Hill would meet with young girls in the city. In 2016, the bridge celebrated 117 years of existence …

Stories linked in time through padlocks on the bridge

Most of them are love stories. Engraved padlocks, upon which I can see names and initials, maybe even dates. People who have said that love is eternal, have locked the padlock and threw the key into the waters of the Someș. I confess that I have always found this association between padlocks and love rather uninspired. However, I smile at the idea of a moment, a unique moment, which was closed in a padlock and became, in his own way forever.

I would like to know more about the stories of these people. I can only let my imagination run wild, to become the director of an imaginary life, I reserve the power to screen actors in the role of a person to create scenarios for rainbow padlock, the green padlock or the dubious padlock.

I looked up occasionally. I notice that it is contagious to stare blindly at small and beautiful things, also two people stopped on the bridge to see what may be seen … ?

Here is the Rainbow Padlock, that was mentioned above…

The Square Padlock of love – my favorite, because it’s more dubious than the dubious one.

The padlocks with colored hearts (many among them)

…the padlock that appears to be among the most recent (if you discover another more recent, let me know and send me a photo!)

Padlocks on the bridge are in themselves a bridge toward the life stories of Clujeans and those visiting the city on the Someș. Stories locked right here, above the waters of the Someș.

Watch them as small treasures whose keys will never be found. You can only imagine.

Who or have all these people with hope, love, souls guided by their personal story left a piece of their story here on the Elisabeta Bridge?