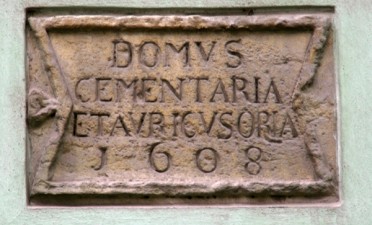 In Cluj once functioned, beginning in 1527, a mint house (domus cementaria et auricusoria), in which the principalitie’s money was minted. Coins in Cluj were first introduced by János Zapolya (1487-1540), voievode of Transylvania, and later, the king of Hungary. The mint was located on no. 4 Emil Zola Street close to the Franciscan Church, at the eastern limits of the old medieval city and was leased for a long time to the Filstich family in Cluj. In the city also existed a princely chamber, that held the role of a treasury, where precious metals were exchanged.

During the sixteenth century, Cluj developed through urbanization, architectural innovations, as well as artistic styles. The presence of princes in Cluj such such a long period of time attracted merchants, craftsmen, and artists who contributed to the city’s economy, already thriving. Stone bridges were built over the Someș (1573, 1585) and drinking water was carried through pipelines constructed through pierced tree trunks.