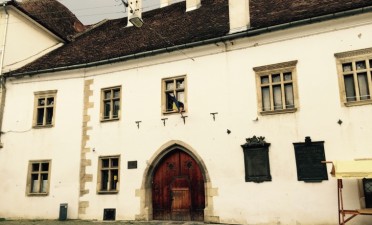 The building, in its current form is the result of several significant transformations since the late fifteenth century but was probably the most significant building during the previous period ,adequate to accommodate the family of Janos Hunyadi.

It is unknown exactly why Cluj was chosen, respectively this house for Elizabeth Szilagyi, wife of Janos Hunyadi. It is very likely that the choice of Cluj was the result of thoughtful options.

How did Hunyadi’s wife arrive to give birth in Cluj?

As a reward new king appointed Janos the prince of Transylvania, a province that had supported the Hasburg dynasty. Janos’ pacification of Transylvania was difficult, and in the process the city of Cluj proved to be a good support for him.

Cluj in turn need the support of the new prince of Transylvania because the city had previous lost some of its privileges after supporting a rebellion in 1437, and now the opportunity arose to recover them by Jano’s mediation with the royal power. The interest and support were so mutual and cordial that Janos Hunyadi chose Cluj for hosting his pregnant wife. Obviously, his family also had Hunyadi Castle at their disposal, the main residence of the Hunyadi.

Later, King Matthias decided to make the building exempt from taxes, an exemption that following rulers respected. On September 28, 1467 he exempted the son-in-law of the former owner Méhfi Jakab, Kolb István, the current owner, of any taxes and duties. This exemption was reinforced in 1649 by George Rákóczi. From the descendants of Kolb, the house became the property on the town in 1734.

At the beginning of the nineteenth century house was a prison, then a military hospital. Through a city council decision in 1899, the building is given to the Transylvanian Carpathian Society (EKE) to create an ethnographic museum. After the Second World War in 1945, the Móricz Zsigmond College opened here in order to support poor Hungarian students. After nationalization, the building is rented by the Bolyai University, then given to the Art Institute which conducted courses in the Hungarian language. Since November 1950 it has been the headquarters of the “Ion Andreescu” University of Art and Design. In 2000, the large basements were converted into exhibition space.

Matthias’s House suffered from various changes over time and adaptations to new styles. During the first half of the sixteenth century a series of Renaissance architectural styles were introduced. At the end of the nineteenth century, the building, being in an advanced state of degradation was restored, by introducing styles that were specific to the 1900s. It was restored again in 1940 by the architect Károly Kos and then in communist era, which eliminated many of the changes from the 1900s.

The room of a king

The owners of the Matthias Corvinus house must have been very important people. From the unification of the three buildings should be born early house. From it sends the settlement of windows, window frames, as well as the floor. The oldest part, the Gothic part from the times of Matthias, corresponds the most with the gate and windows positioned towards the west. After some assumptions, the King was born in the room right behind this window.