The Orthodox Cathedral in Cluj is one of the most important religious buildings in Cluj-Napoca. It was built over a period of ten years, from 1920-1930, immediately after the unification of Transylvania with Romania. With a height of 64 m (to the top of the high steeple ) Orthodox Cathedral in Cluj has 8 towers and 4 bell (the biggest bell weighs almost 2 tons!). The building is dedicated to “Assumption of the Virgin Mary” and became an archbishop cathedral when the diocesan seat of Cluj received an archbishopric.

1919 Bishop Nicholae Ivan addressing Council of Transylvania, requesting financial aid to build an Orthodox cathedral in Cluj. The request was approved and, for starters, the Council provided 2 million Austro-Hungarian crowns.

1920 Bishop Nicholae Ivan submitted a request to the mayor of Cluj for the park in front of the National Theatre to be allocated to the cathedral’s construction. This request was also accepted, following a design contest which was won by architects George Cristinel and Constantin Pomponiu. Initial plans included models from Brancoveanu architecture, with obvious Byzantine influences.

1923 The works on September 10 and October 7, 1923, the first cornerstone was placed. The ceremony was attended by Carol II of Romania, Crown Prince together with the prime minister Ion I.C. Bratianu.

1923-1926 the first phase of works took place in whicha skeleton of reinforced concrete was used and bricked while the stone exterior was made of stone from Baciu and Bompotoc. Finally, a crypt was built in the basement, where Bishop Nicolae Ivan, the Archbishop Theophilus Herineanu and Metropolitan Bartolomeu Anania would be buried.

1928-1933 the religious edifice was painted by Anastasius Demian and Catul Bogdan, teachers at the Art Academy.

November 5, 1933 took place the consecration of the cathedral, in a festive atmosphere, the Romanian Patriarch Miron Cristea, together with the Metropolitan of Transylvania, Nicolae Balan and Bishop Nicolae Ivan, in the presence of King Carol II, Crown Prince Michael, members of Romanian government and other personalities. 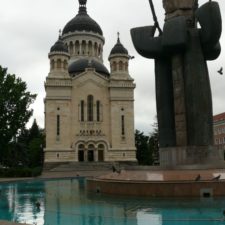