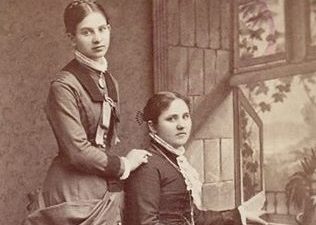 The ladies of Cluj loved reading, evenings with friends, and started schools for children

How cultivated were women in Old Cluj? What occupations the ladies of noble Hungarian families take part in?

The habits of society in Transylvania were not much different from those in England, testifies the Englishman John Paget, an avid travel around the world who come to this conclusion after a stay in Cluj (1835-1836).

The daily habits of ladies in Cluj were the most diverse, from hearing the news, embroidering, painting, to reading foreign literature. Interest in books was so great that a book club was set up in Cluj through which the latest releases could reach the hands of the “devotees” as quickly as possible.

“The ladies usually spend their mornings dealing with problems in the household or listening to the news and rumors surrounding the day while embroidering. True, some of them spend this time in front of the easel or drawing table, while others choose to enrich their minds by reading selected works of foreign literature. Besides a good library in the city, the ladies recently established a book club to quickly and more efficiently get new books,” writes the English writer.

The ladies from Cluj read the great foreign writers in translation, but also in the original language, an occupation that many Englishwomen did not take part in:

“I know many ladies who know the best names and classical works by reading either in the original or in translation and few are those who can not speak about Byron or Scott. Not necessarily that this proves a particular prowess in literature, but I fear that if we ask the ladies in England how many know about Hungarian writers, but even about the Germans, we often find that only a few have such knowledge.”

Clujeans enjoyed sitting at home, but not so much as to be slaves to their houses. After lunch, the ladies would receive visitors and spend evenings in the company of friends.

“At least in winter, society granted more time and attention to ladies. After lunch, people begin to make visits. During the summer, they go and walk around the park or elsewhere in surroundings and only later receive visitors or go home to spend evenings with friends. Although they are more connected to home than the French, Clujeans however, are not slaves of their homes like us British. If you spend an evening alone is not considered to be a catastrophe, but evenings are usually spent in society.”

Being subject to the events of the age, loving reading, Transylvanian women had their own opinions, which they often expressed.

“There are many women in Transylvania who, through their excellence and manners, would fit in any society.”

Intelligentsia was not lower than in other countries. He was amazed at the freedom with which political and religious discussions are conducted with the women and especially their interest and involvement in them. (In Romania, women had the right to vote only in 1938, while in Hungary they achieved this in 1920).

Many of the women belonging to the Hungarian noble families were involved at that time, the creation of schools in Cluj, so children of different ethnicities and religions enjoyed education together.

“Baroness B. took me to see a school that was very interesting and who was and occupied, in part, when it was founded. At this school there were children of all religions and was built to help the poor Protestants, and others educated their children elsewhere as there was a tendency to convert to Catholicism, which happened in other places. It was following the Lancaster system and seemed to be successful. Students learn the basics of education, but insists on religion and customs. The work of the day are started and concluded with prayer and a hymn, and reading passages from the Bible. Some children were Calvinists, Unitarians, Catholics, Orthodox, and Jews (the latter did not participate in the religion classes).”

One of the ladies with a big heart in Cluj was Baroness Josika:

“Baroness Josika also founded schools for the lower classes, Cluj being indebted to this great lady for many of these investments.”

Other impressions about Cluj from the writer John Paget: