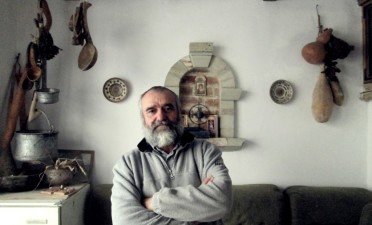 In the workshop of a Cluj sculptor: Ilarion Voinea

To step through the heart of the city in broad daylight. The city has a different rhythm at lunchtime when people establish their rhythm after an frantic and hectic morning. Maybe it is their hunger, who knows. Fieldwork has a way of taking you out of daily routine of sitting at a desk and sometimes brings unexpected joy.

The bustle is also present on tiny Janos Bolyai street. There, among all the people who run in all directions, you do not know how too notice him. He sits in front of a gate, hands behind his back, with a beard smiling in the Sun. Just sitting and watching. It is the face of a man who has guided generations of children and young people, so we know it, at least. Although the world knows him (if he’s aware of it) as a public sculptor. Statues, busts, and monuments in Cluj and other cities.

We know him as the “Professor of Sculpture .” Perhaps it does not say enough, because he taught us the joy of a pencil on paper, the fascination of angles, lines and to gaze into space, the unrivaled sensation of the moment of creation, birth formed by clay modeling. We learned to listen to different music: the perfect sound of jagged wood.

Now, here is the workshop of the “Professor of Sculpture!”

Ilarion Voinea (how fascinated I was by the musicality and sound of his name!) was for years a professor at the “Tudor Jarda” School of Arts in Cluj, being involved in numerous cultural and artistic activities, taught for 8 years University of Oradea and is best known for the statues, busts, and monuments that he created.

For example, in Cluj, we can admire the bust of Sigismund Toduţă in the Central Park, located now in place of the bust stolen from there a few years ago, and “U” Cluj fans (and not only) can enjoy the statue of Dr. Mircea Luca, the former team captain, located at the main entrance Cluj Arena. A model of the statue I discovered with delight in his workshop:

He has dozens of public monuments in Cluj, in Romania, and abroad. Furthermore, Ilarion Voinea does sculptural genres as well as small plastic sculptures, having the modeling benchmark and using different support materials: wood, stone, bronze. Passionate for archaic and plaster forms of the Romanian peasant, specifically those from wood (you can read here an article written by him), Ilarion Voinea succeeds in transmitting the the passion for wood to other “students.”

It is a pleasure to listen to him discuss art and sculpture, and here among the statues of bronze, wood, stone, or ceramic, including gypsum models, projects and ideas float in the air, the sound takes on a different valence …

We leave the place richer spiritually, thankful for the opportunity to step into the studio of an artist from Cluj. You can say that beyond the old gate on Janos Bolyai holds a treasure