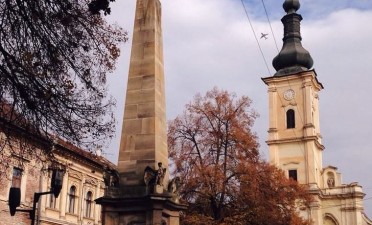 The Franciscan Church in Cluj is one of the oldest and most significant places of worship in Cluj, situated on what is today nr 2. Piața Muzeului (in the past it was known as Piața Mică, Piața Carolina, and Piața Dimitrov). The church’s patron day is on the 5th of August, celebrating “Maria Zăpezii” (the saint of the Basilica of Santa Maria Maggiore in Rome).
Originally, on this spot existed an older Roman Catholic church, the first in Cluj, built during the 11-12th centuries, but destroyed during the great invasion of the Mongols (1241). After the destruction, the current church was built in its place between 1260-1290.
The place of worship has been built in a late Romanesque style. It is assumed that it was a small parish, received forthe use of Dominican monks in 1390.
With the support of Janos Hunyadi and Matthias Corvinus (between 1428-1529), the development of the powerful architectural complex began: a Gothic church and a monastery with a courtyard.

The monastery, inhabited by Queen Izabela of Hungary
With the expulsion of Catholic religious orders by the Protestants in March 1556, the monastery’s buildings were no longer used for religious purposes. Few know that in 1557, Queen Izabela of Hungary lived in the monastery, after which the abode was transformed into a Unitarian School in 1568. In 1609, according to the wishes of Prince Gabriel Bathroy, the building was doanted to the Reformed Calvinists.
The rule of the House of Habsburg was established in 1693 and the church and monastery were returned to the Roman Catholic Church, being used by the Jesuits. They set up their own school in the building. The Jesuit school functioned here until 1725, when the Jesuits finished the construction of their own college and church (The University Church in Cluj, the Convictus Nobilium in Cluj), which faciliated the return of the Franciscans into the city.

In 1728, the Franciscans initiated a campaign to restore the church and they constructed a tower on the western facade in baroque style, vaulting to a lower elevation than the old formerly Gothic tower that had collapsed. From the literature regarding the church’s construction, Konrad Hammer worked there for a long time, and to him is attributed, in 1728 and between 1734-1745, the vaulting of the church and the construction of the monumental tower.

Franciscan Church, watched by the Carolina Obelisk for more than a century
In 1898, in front of the church was placed the Carolina Obelisk, after being moved from Piața Unirii.
Inside the monastery is a famous library of the Franciscans, in excess of a thousand volumes. Between 1906-1948, the St. Bonaventure printing press functioned in the library, printing religious magazines (“Catholic World”, “Holy Cross”, etc)
The final restorations of the building was made between 1976-1978, followed by another in 1980-1986. During these occasions, were discovered some Gothic elements of the the abode.
In 1949, the place of worship became a parish church after the Communist authorites decided to dissolve the Franciscan Order in Romania. Only after 1990 did the church became a monastery church again. After the Communist authorities abolished religious orders, the monastery building housed the “School of Music”, which later became the “Sigismund Todruța Music School.”