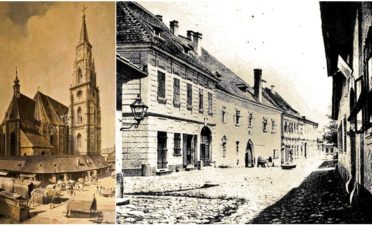 We like stories with medieval flair, shrouded in mystery. When speaking of historical facts, you often feel that there is no place for mystery, but in fact, the contrary is true. Concerning the people who once lived on these lands in the same city, we become curious: how were they, what were their occupations, their interest?

Leafing through the book “Povești despre Cluj” (published by Școala Ardeleană, 2015, coordinator Tudor Sălăgean), we learn from Michael Florin Hasan a few stories about medieval Cluj, interesting stories about Clujeans that are less “explored” by us, Clujeans today.

There are stories of criminals and crimes, cases and situations that stir our imagination, because beyond the known historical data, we can only imagine how it was …

Cluj seems to have its own Montecchio and Capoletto families, although there wasn’t a Romeo or a Juliet to speak of. The problems began in 1327 after disagreements between two families in Cluj, Petru, son of Felician and his relatives, on one side and the counts Stark, Zekul and their relatives, on the other side.

Things seemed to be resolved at some point, but violence broke out on Palm Sunday, April 5, 1338, contradicting the spirit of the day. In the center of town, Petru and his relatives pounced on Stark’s people with weapons: some were hurt, others were dismembered, others were crushed with clubs.

It makes us wonder, not without a little smile, if not George R. R. Martin, the writer of Game of Thrones (series A Song of Ice and Fire – after the famous serial was made), was not inspired by medieval history of Cluj, considering fate, and the Stark family name.

In the same year, relatives of the fugitive Petru, having been sentenced to death, secretly entered the city and set fire to the houses of the sons of Stark. They, along with their families, were burned alive.

For two years, Petru and his relatives lived in the forests around the city, organizing a well-armed gang of criminals. Finally, Petru’s small “army” was destroyed by the intervention of the vicevoievode Peteő Derencsényi’s troops.

What was the reason for such violence and what it led Petru to commit these crimes against Stark’s family remains a mystery.

On December 18, 1360, the Transylvanian vice voievode requested an investigation into the premeditated murder of the noble Nicholas, son of Deme Tyburchtelku. The captain of Transylvania responded to this request by saying that this crime could have been premeditated by Ștefan Silivaş and Ștefan, son of Petru the Great, following the instigation of serfs of Chinteni, that the noble Nicolae was without fault.

No one knos how the case wa resolved, but historians believe that it is possible that Nicolae paid with his life the abuses of his father, Deme, who was already dead at that time and which, by its actions and proximity to Ștefan Pogan, that the residents of Chinteni were prompted to solve a two decade old conflict by committing this crime (indirectly, using two hired swords.)

The same vice voievode Petru requested in December 18, 1362, an investigation into an attack at the Abbey Cluj Mănăştur by the judge from Feneş (now Floreşti).

The judge Hench attacked the abbey alongside the Saxons from Feneş, Andrei the miller from Cluj and other friends and relatives. Over 23 individuals “armed for war” were at the abbey searching for Paul de Suceagu, son of Chuey, whom they pulled out of the convent and beheaded.

The case was alarming because the victim did not benefit from asylum at the abbey. Also, the question remains: what did Paul de Suceagu do that managed to stir up such hatred? Debt? Abuses? No one knows.

In 1430, the bishop of Transylvania, George Lepes, received a letter from the pontiff Martin V asking him to intervene and save Elisabeth Jacobi in Cluj, the wife of Michael Koscher, from execution due to having committed adultery.
There remain many mysteries here:

***
Medieval Cluj has lived in chapters full of intrigue, crime, mysteries, unsolved cases, misunderstood and searing passions. The crimes are part of the story of any city, present or past. Small incursions and explorations of such stories about medieval Cluj helps us have a more complete picture about the evolution of the city on Someș.

For many and varied stories Cluj, you may want to attend meetings organized by the Vechiul Cluj Association, and the recommended reading “Povești despre Cluj” published by Școala Ardeleana, 2015 (Volume coordinator: Tudor Sălăgean).
Photos are taken from the album “Old & New Cluj / Kolozsvar” composed by Levente Furu. Despite the fact that they obviously belong to different time periods, they full an aesthetic function and imaginative role.