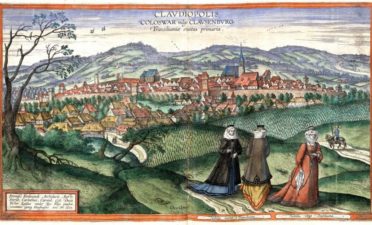 Four other stories from medieval Cluj

Concerning medieval Cluj you certainly can not say that it was boring. People lived intensely (and short?) In the treasure city of Transylvania. If you found the first four stories from medieval Cluj to be interesting, full of intrigue, and mystery, we have more for you. ? Remember, they are not beautiful fairy tales or bohemian stories. There are stories that stir your imagination and challenge you to ask yourself questions about life in Cluj long ago.

Leafing through the book “Povești despre Cluj”, we learn from Mihai Florin Hasan the following four stories from medieval Cluj:

Did you know that the abbey in Cluj Mănăştur had a place for executions in Baciu, towards the forest? Here the main leader of the revolt in Bobâlna (1437-1438) was executed: Anton the Great from Buda. They were troubled and violent times. The other nine leaders of the revolt were part of a horrible death, being impaled on the hills of Turda. The heroic resistance of those involved in the uprising in Cluj, alongside the poor townspeople and peasants ended in January 1438. Anton was then captured by the nobility and most likely slaughtered in Baciu at place for the executions conducted by the abbey. It was fashionable back then, for pieces of the rebels’ bodies to be exposed in the places where they were active and that is what probably happened to Anton. As I said, troubled and violent …

2. When the residents of Cluj killed Ladislau Pongrác (1463)

Ladislau Pongrác was the govenor of the Cluj Mănăștur abbey at the time. He was also, among others, the cousin of the king, Matthias Corvinus. This does not, however, save him from the wrath the local residents tired of “abuse, insults, molestation, depredations and vexations … that the gentleman Ladislau” committed. We discover the story in its entirety from the letter of the Cluj magistrate to his counterpart in Sibiu, in which he asks him to explain the situation to King Matthias.

Apparently, Ladislau went “like a rabid devil through town,” hurting Clujeans, breaking the doors of the houses, robbing homes of all valuables, and attacking ordinary people. These actions attracted the uncontrollable wrath of Clujeans, who violently killed him. The murder led to the siege of the city by prince Ioan Pongrác, with the help of cavalry from Sibiu and siege cannons from Ocna Sibiu. Thus, it was clear that the magistrate in Sibu had failed to intervene with King Matthias for the Cluj residents. In fact, in April 1464, Sibiu granted the right to freely choose the royal judge – perhaps a reward for contribution of Sibiu towards the punishment of the Clujeans.

3. The goldsmith Simon deals with aiding and abetting (1466)

In 1466, goldsmith Simon (Symon) in Cluj complained that the judge committed an abuse of power and illegally held him for 25 days. Moreover, the goldsmith would be denied parole because of a large number of witnesses. The case reached the seat of the Judge in Bistrița. Apparently, the problem was that the goldsmith Symon melted gold stolen by a professional gang from churches. If it would not be solved in Bistrita, then it would arrive at the headquarters of the judiciary in Sibiu and if no there there was a settlement, the royal treasurer.

4. How a priest skilled in military strategy found his end in Cluj (1514)

If we learn something from these stories about medieval Cluj is that, at the time, Clujeans were very determined to provide examples of justice and used very brutal methods. An example of this is the case of Lörinc Mészároș, the parish priest, one of the leaders of peasant revolt led by Gergely Dozsa. Lörinc Mészároș was the parish priest in Pest county, somewhere approx. 74 km from Budapest today. From there he went with his troops and entered Maramures, Satu Mare, and Crișana. Although he managed to defeat the nobles in Oradea, Cheresig, and Săcuieni, Lörinc Mészáros was subsequently forced to join in the attack on the supreme commander of Timisoara.

In Timisoara, Dozsa was defeated and executed five days later (July 20, 1514). Along with Anton Hoszu, Mészároș escaped from Timisoara and continued the rebellion in Transylvania. He won a series of victories in Oradea, Zalau, and Cluj. In Cluj, he manages to get the remaining insurgent troops after promising the judge that he would not cause harm. However, here he was defeated and retreated to Oradea, again having miraculously escaped from the battlefield. The priest was a charismatic leader and a great strategist, but rebel morale was shaken at a time of thunder during the speech given by Lörinc. The final battle in Biharea was doomed, apparently, and at the end 3,000 rebels were dead left on the battlefield.

Loved by many who followed him, but the priest was betrayed by those who he had fought for. The villagers captured him and handed him over to Prince, who was granted amnesty to those who have betrayed the priest. Lörinc Mészároș was sentenced to death. The execution took place in Cluj, in the public square, in a brutal way. Burned, impaled, burned again – nobody knows the exact order. The fact is that the rebel parish priest had a brutal death.
_______________

Medieval Cluj has lived chapters full of intrigue, crime, mysteries and unsolved cases, as well as misunderstood and searing passions. The crimes are part of the story of any city, past or present. Small incursions and explorations of such stories about medieval Cluj helps us have a more complete picture about the evolution of the city on the Someș.

For many and varied stories about Cluj, you may want to attend meetings organized by the Vechiul Cluj Association, and the recommendation reading “Povești despre Cluj” Transylvanian School Publishing, 2015 (Volume coordinator: Tudor Sălăgean). Photos are taken the albums of Vechiul Cluj.