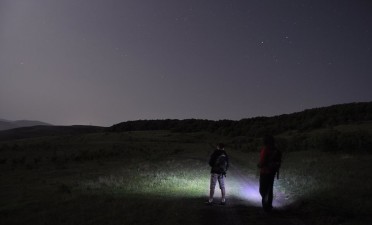 Summer rains can sometimes have a liberating force. You would think, being rational, that a torrential downpour would put a lid on your plans. Also, can you feel the need to hide inside your nest to enjoy a vague sense of safety.

But the spirit of adventure wins out, at least occasionally, and have decided: you go hunting for mysteries and wanderings through Hoia-Baciu Forest, this tiny Romanian Bermuda Triangle.

The outing had been planned and rescheduled on numerous occasions, but Friday, June 20, the desire of some people to discover this forest around Cluj ignored the large drops of rain, loud thunder, mud, and the cold and moist afternoon air.

Some want us to be brave, but the fact that that two versed guides spotted our steps removed most of the worries. It is the first outing of this type organized for local people, by the people from the Hoia-Baciu Project. And the excitement is in the air, from the first steps toward the woods.

Some want us to be brave, but the fact that that two versed guides spotted our steps removed most of the worries. It is the first outing of this type organized for local people, by the people at Hoia-Baciu Project. And the excitement is in the air, from the first steps toward the woods.
Marius Lazin and Surducan Dan Alexandru, who initiated this project, oscillates between skepticism and spontaneous curiosity that leaves room for the immediate reality. Members of the non-profit association Romania – Your Lifetime Experience, which for over two and a half years has promoted Romania’s micro-touristic destinations, our tutors have a clear goal: they wish to encourage locals and others to visit a new touristic attraction and to create a community of people who are interested in the darker and mysterious side of nature.
As we meet up on Donath street and leave the city behind, under umbrellas and capes, sprout questions and curiosities (confirm: even the most skeptical minds among us).

Puffins, the dog accompanying the group, makes a friend, a red dog that joins us, while maintaining some distance. Learn just the beginning, we stuck with a small mishap: Puffins annoyed a (pseudo?) cow herder, which pours verbal wrath upon the group. Never mind, today we are brave, nothing seems to chase away curiosity and enthusiasm.

Along the way, through the tree trunks, we see signs of Wicca. Alex tells us a brief story on this cult of witchcraft and we slowly begin feeling how this forest became Mistress.

Arriving at the edge of the woods, it seems that the city, which you can now see from above, has lost all of its influence. While the skepticism inside yourself amusingly says that there is no chance to experience the paranormal here, this forest has its own charm and bizarre elements that did not really want to fall apart through rationality.

Eventually, as the boys from the Hoia-Baciu Project say, remains the decision of each of us as we see the world around us, how we choose to interpret the phenomena of reality. We see it through scientific eyes, purely rational, or we leave room for the inexplicable, an open door towards the idea that our senses can not understand all objective reality.

In Poiana Rotunda, which is…round as possible, the made a well deserved pause. Here, having gathered in a circle, and began to get to know our fellow travelers better. We spoke more about the forest, about the paranormal phenomena that had been recorded there, and about the events that have sparked interest over time.

Our organizers and guides tells us about the interesting and mysterious happenings that have reached their ears or what they have chanced upon on the trails that they have hiked on here.

Perhaps the most common abnormalities that occur in the Hoia-Baciu Forest are problems with electronics (batteries suddenly dying, phones restarting, GPS issues, problems in setting up sound frequencies for auio-video.

In addition, there are bio-physiological changes such as feeling sick, headaches, chills, nausea, and in the extreme, the experience of Mr. Cristian Mureșanu, video journalist at TVR Cluj and the presenter of the show “Știință și Cunoaștere,” that after his tools and technical equipment were affected by powerful radiation, he suffered for a month of hair loss, and the back of which completely went white.
Other stories of people who have stepped into the mysterious forest sinks further into the paranormal: the lights seen above the forest, abnormal movements of tree leaves, the crackling metallic voices where the sources cannot be identified as well as unusual things that usually appear in photographs and video footage or even temporal abnormalities.

The wind began to blow strongly in Poiana Rotund and we began to feel the cold (or was it simply the creeps). We break our circle and moved towards a path. Within walking distance of the meadow is the so-called “bubos tree.” Marius then exposed us to some unconfirmed assumptions and posed a question that does not have a definite answer: “What do you think is the explanation?” Moreover, the forest is abound in trees with trunks and tangled branches, others inexplicably tilted in a certain direction or with a bizarre bark.

It is impressive to hear the stories and mysteries that formed around the forest or, conversely, should one believe that it is like any other forest, the place is picturesque enough to merit attention in terms of tourism. Hoia-Baciu Project kicked off: Cluj has beautiful natural attractions, has stories to tell and emotions to transmit.

So far, the team has organized guided tours (night or day) with more tourists and foreign journalists, among which we can mention Bob Woodruff of ABC News Anchor, Lester Reichert from Paranormal Survival Show (Travel Channel), Aaron Sagers (ParanormalPopCulture.com founder and host of the show Paranormal Paparazzi – Travel Channel) Dacre Stoker the great-grandson of Bram Stoker, author of the famous novel “Dracula.”

After coming back to the edge of the forest, the dreamy light pinkish sunset is masked by the still heavy clouds, but that is enough to render the hills and the city with a mysterious heat. This phenomenon is explainable, but it is enough to be thankful that it is a beautiful sight and you smile while walking back home.

The Hoia-Baciu Project aims to help us discover the Hoia-Baciu forest as it is. The phenomena that takes place here is neither repetitive, constant or of the same intensity. Marius and Alex do not intend to scare “the created spirits of the forest,” but to help people to discover the place, to connect and to interact in an authentic and original forest, and to discover its power. For beyond the paranormal stories, the landscape and views are simply wonderful.

To develop, maybe, a more commercial guided tour, we can with confidence recommend to you the team of the Hoia-Baciu Project, you will discover the forest as it is, but you aloft in the concrete and recent happenings that carries its fame far beyond the borders of Cluj.