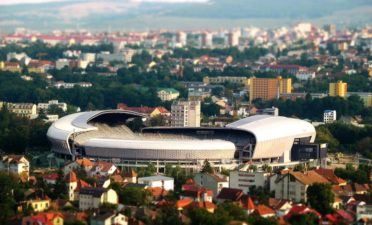 Built in 2011 on the site of the old “Ion Moina” stadium, Cluj Arena has become the representative stadium of Cluj-Napoca. Located in the central part of town, near Central Park, Cluj Arena hosts major football matches and other sporting events or concerts.

Cluj Arena is owned by the Cluj County Council and is administered by the representative company Cluj Arena S.A. and the main beneficiary is the Universitatea Cluj Club. Built to the highest standards the arena is listed as part of the UEFA Elite category. The stadium consists of two stands and two lawns, has a capacity of 30,020 seats, the majority being covered.
Short history
Reconstruction work on the new arena began on 15 July 2009, after winning the auction of the project submitted by the Technical University in Cluj-Napoca. Originally, they wanted to relocate the athletics track outside the stadium , but the Technical University included a running track inside the arena, 8-track running (not six, as stipulated in the original draft). The work cost about 30 million and was completed in autumn 2011.

Also in 2011, former slag field in the vicinity of Cluj Arena, work began on a 7,000 seat Polyavent hall!

On October 8, 2011, at its inauguration, the German band rock Scorpions held a concert at Cluj Arena before an audience of over 40,000 people, and the next day, on October 9, the band Smokie also held a concert. It was the start of memorable concerts for the Cluj audience and beyond, over the following years: Roxette (July 2012), Deep Purple (June 2013), UB40 (June 2013), the musical event Forza ZU (2014) the UNTOLD Festival – Avicii, Armin van Buuren, David Guetta (2015).