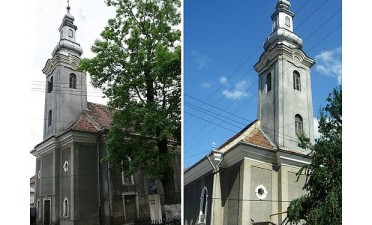 Bob Church, the oldest Romanian church in the “Treasure City”

Bob Church, dedicated to the Resurrection, is the first Greek Catholic church built in Cluj and the oldest Romanian church in the city. It was built in the Baroque style between 1801-1803, by the architect Jozsef Leder, one of the most important representatives of late Baroque architecture in Cluj and Transylvania.

The history of the church begins in 1798, when the commission of Bishop Ioan Bob and the secretary of the Transylvanian Governate Mihail Oros bought a plot of land on Cărbunelui Street, and then in subsequent years the Greek Catholic parish bought neighboring plots in order to build a church.

The walls were built in 1800 with the support of the bishop and the supervision of the civil offical but without the authorization of the authorities as the building was originally declared as a grain store. At that time, Cluj was a city inhabited by Saxons and Hungarians while the Romanians were not entitled to build their places of worship inside the old city. The construction of the Romanian church was regarded with hostility by the city authorities, but the place of worship continued to exist because of the interventions of Mihail Oros.

The place bears the name of its founder, Bishop Ioan Bob, who had become the Greek-Catholic bishop of Blaj, bearing all the expenses for the church’s construction. It seems like gilding of the altar cost 240 florins, which shows that huge expenses were made for this church. Only the church’s walls cost 4828 florins and two barrels of wine, as evidenced by the intense correspondence exchanged between Mihail Oros and Ioan Bob. The expenses grew due to the fire that destroyed part of the city’s center in 1801 and that affected the construction of the place of worship.

The place of worship is known for the wedding that took place here in 1864 between Veronica Micle and the professor Ștefan Micle, future rector of the University of Iaşi. The church has undergone over time many restorations. Of these the most important was that of 1906, when it the collapsed vault of the nave was demolished, and in its place was built a new roof structure from rabitz. Unfortunately, this led to the loss of the original mural paintings of those areas. Another intervention during the year changed the shingle roof with tile scales and the church towers were covered with iron. After the Second World War, the church building was repainted and sanctified again by the first Roman cardinal, Bishop Iuliu Hossu.