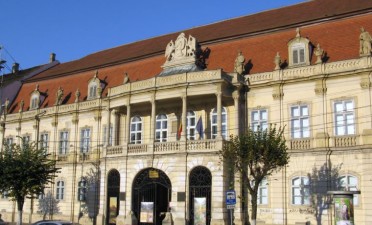 Bánffy Palace, which now houses the Museum of Art (No. 30 Piața Unirii) is a special architectural beauty of the city of Cluj. The noble Hungarian family Banffy, Dionisie Bánffy with his son Gheorghe Bánffy, one of the most well known families in Transylvania, were the ones who built the imposing architectural masterpiece between 1774 and 1785. Gheorghe Bánffy (1746-1822) finished at the military academy in Vienna and became the Count of Cluj and from 1787 held the function of governor.

One of the most educated aristocrats of the time in Transylvania, Governor Gheorghe Bánffy appointed Johann Eberhard Blaumann (1733-1786), architect and stonemason born in Böblingen (Germany, Baden-Württemberg), to lead the construction of the Palace. Count Gheorghe Bánffy proved that he is no stranger to architecture because it gives the order of Roman facades and the Ionic court inside the palace. For his work Blaumann was paid 12,000 Rhineland florins, 200 buckets of wine and 50 bushels of wheat, a huge sum compared to his annual salary of 200 florins in Sibiu.

Blaumann was not only an architect, he also created the architectural ornaments in relief of ceilings and some stone pieces. For these works, Blaumann was rewarded with 4,000 florins. The items were made of stone by masons from Sibiu and Cluj such as Josef Edlinger, Josef Hoffmayer, all are led by Gottfried Hartmann (Hartmann’s creation is the balcony with columns). Also, the palace’s sculptures, outstanding quality, signed by the Rococo sculptor from Cluj, Anton Schuchbauer.

11 years of work to complete a masterpiece

Building palace and carrying plastic decoration took craftsmen 11 years, the entire work proved to be a complex one. The rococo frontispiece is composed of six stone statues from Greek mythology: Perseus, Apollo, Ares, Pallas, Athena, Artemis, Hercules and the Bánffy family crest with griffin.The balcony façade in the back is supported by three griffins and semicircular on the floor are decorated with allegorical busts: the four elements: fire, water, air, earth, the four seasons and the four continents: Europe, Asia, Africa, America.

The building that served as a model for Blaumann’s design for the Bánffy Palace in Cluj-Napoca remains an enigma. There is only assumption that model would have been a palace in Vienna or Royal Hungary.

After completion of construction, numerous rooms of the palace were rented to markets the ground floor rooms were equipped with separate doors for stores. Also, Count Banffy’s house is situated on the main wing.

Numerous parties, proms, and concerts took place at the palace; one which even held a special guest pianist Franz Liszt, one of the most famous Hungarian composers. The palace has even hosted royalty. In 1817 the Emperor Francis I of Austria (1792-1835) and his wife, Carolina Augusta, feasted here. Another Emperor Franz Joseph of Austria-Hungary stopped twice at Banffy palace in 1852 and 1887, accompanied by Empress Sisi.

After the death of Count Gheorghe Bánffy, over time, the ground floor of building was used as a commercial space, confectionery, photo shop, and cinema, which was designed for outdoor movies.

In 1948, the palace was nationalized, and the owner at the time, Dionisie Bánffy and his mother were moved into a house on the periphery of the city. In 1962 the Museum of Art began its activities in a part of the palace, and in 1970 the entire building was taken in use.

Restoration work in the 1960s gave the palace its current appearance. Much work was done – vaulted several rooms of the ground floor, unoriginal bulkheads demolished, the Nordic arches (affected by the cinema) were reconstructed, and the original entrances of stores were converted into windows.