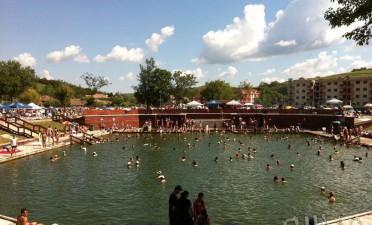 I. Route Type
This route is recommended for all ages. Whether you would like a health and wellness stay, or just to cool in an afternoon, Baile Cojocna is the ideal choice.

Route Duration: a day, one weekend;

Baile Cojocna is located in the eastern part of Cojocna commune in Cluj County on the left side of Valea Sarata river. The Cojocna area has been known since the Roman occupation period for the exploitation of salt. The salt mines remained in use until the Middle Ages. Above them, in time were formed many saline lakes and Toroc Lake and Mare Lake were converted into recreational and therapeutic baths.

The curative benefits of salty water in the Cojocna area were known since the Roman period and the current baths date from the late nineteenth century. Baile Cojocna is famous for treating many types of diseases, but is also a source of fun and refreshing during in summer.

In Cojocna commune there are several salt lakes including: