Located on the shores of the River Somes, just 250 meters from the Central Park, close to the Cluj Arena, and only two minutes from the historical center of Cluj-Napoca, the Grand Hotel Napoca Cluj is the ideal choice for both tourists and businessmen that desire accommodation in a pleasant environment.

Among the newly renovated accommodations, the Grand Hotel Napoca Cluj offers over 150 rooms that are rated with 3 and 4 stars. All of them have modern décor and are equipped with air conditioning, free internet access, carpeting, and flat screen TV.

As the largest conference center in Transylvania, the Grand Hotel Napoca Cluj is proud of its bright conference rooms that are equipped with modern equipment that is of the highest standards, willing to satisfy any event organizer. The Conference hall’s total capacity is 4000 seats with 1600 of them being located in a single room, called “Europe”.

The Grand Hotel Napoca Cluj has a restaurant that serves international cuisine, along with an a la carte menu. Those interested can choose to organize various dinners and weddings, baptisms or parties with the help of 5 rooms that are especially devoted to this purpose. There is also a terrace where guests can relax and enjoy the surroundings of the hotel. 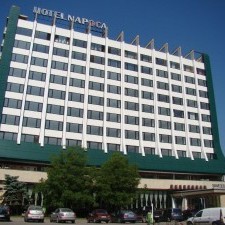